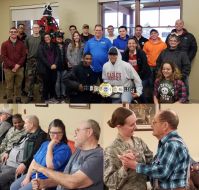 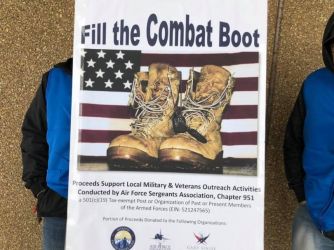 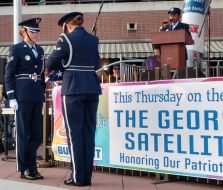 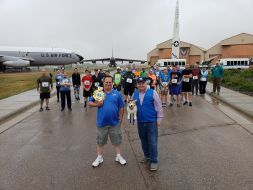 Each year AFSA Chapter 951assists the South Dakota State Veterans Home by contributing to to the wellfare of the residents. On February 14th a group from Ellsworth AFB/Team AFSA goes down to take part in their Valentine's Day Dance. They do everything from dance with the residents to just sitting and having a conversation. Around the first part of December we go down to decorate for Christmas.

During the weekend on which Armed Forces Day takes place (thrid Saturday in May) the chapter does a fundraiser called "Filling the Combat Boot."  People from the Chapter and Ellsworth Private Orgs span out to several locations taking in donations using combat boots. Money raised is split between three veterans charities and the Private Orgs on Elsworth who participate. Last year we raised over $9,000 in those two days

On the second Thursday of August, the Main Street Square in Rapid City puts on a concert in honor of all the first responders.  This event  is actually the "brain child" of Chapter 951's own "Super Dave" Bamburg and Kevin Ott.  They approached the Square about doing something to give back to Veterans and over the years it has grown into an event with a Veteran singing the National Anthem, a flag folding ceremony and other Veteran related activities.

Every September, the 3rd Saturday of the month, we hold a 5K Run/Walk event.  It begins/ends at the Ellsworth Museum located  outside the base. People register online either as an individual participant or as teams. Those registering recieve a POW/MIA shirt  for their fee. Prizes are given out to the top 3 winners in the men/women categories and the orgization with the most people are put on the plaque.